This week marks the one-year anniversary of Gone Girl Comics, my first mini comics offering.  Issue #1 - “Some Seattle Stories” - received great reviews from The Comics Journal and The Comics Bulletin, and I’m working on Issue #2 as we speak.

In keeping with themed publications, Gone Girl Comics #2 will be built around “Urban Animals.”  While I haven’t always lived in gigantic cities, it’s safe to say I’ve spent most of my life in paved environments, surrounded by buildings.  My primary contact with nature has been via creatures that can survive in the fragmented habitats that urbanization creates.

So I have comics about spiders, beetles and birds, including a story about my very weird encounters with crows.  I’m especially excited about a story involving beached whales.  Yes, whales do beach themselves on the shores of the  “citified” coastal American Pacific Northwest.  Sad as this is, what excites me about the whale story is that it is a collaboration with Tracy Lang, an artist who is renowned for her printmaking skills and also happens to be a fantastic writer.  It’s a story that will break your heart open.

On the more humorous side of tragic, Gone Girl Comics #2 features "Cat Door Monster."  It’s a story about fear disguised as a story about cats.  It’s an awesome artistic achievement for me because it dispatches with the obligatory cat comic and the obligatory monster comic simultaneously.

You can read the entire story here, on inkt|art.

It's worth taking the time to check out the rest of the inkt|art site as well.  inkt|art showcases women comics creators—specifically those who work from a fine arts perspective.  I love the editorial focus of inkt|art and think it adds another much needed perspective to the dialogue that’s happening around women in comics.

I mentioned that "Cat Door Monster" was both comic and tragic.  Most of my work is autobiographical and the cats in the story are real pets.  As the story is one of my first attempts at humor, it pains me to report that the “1,000 year old cat” (Grey Kitty), who makes a guest appearance on the first page, passed away just a few weeks after I finished these drawings.  His elderly owner played “Taps” on the trombone when they buried him in the yard.

Posted by Noel Franklin at 8:33 AM No comments:

Welcome to C-log, the weekly Gone Girl Comics Blog by Noel Franklin.  I’ll be reporting from Seattle, WA every Tuesday about comics, art, the creative process, fellow cartoonists and the communities we weave.

June 25th marks the one-year anniversary of my first mini comic - Gone Girl Comics, Issue #1 - Some Seattle Stories.  While this was my first serious comics effort, I consider it a marriage of the years I spent jumping back and forth between visual and literary arts.  Bringing images and words together with the goal of making great comics felt RIGHT, and that's what I'll be doing from here on out. 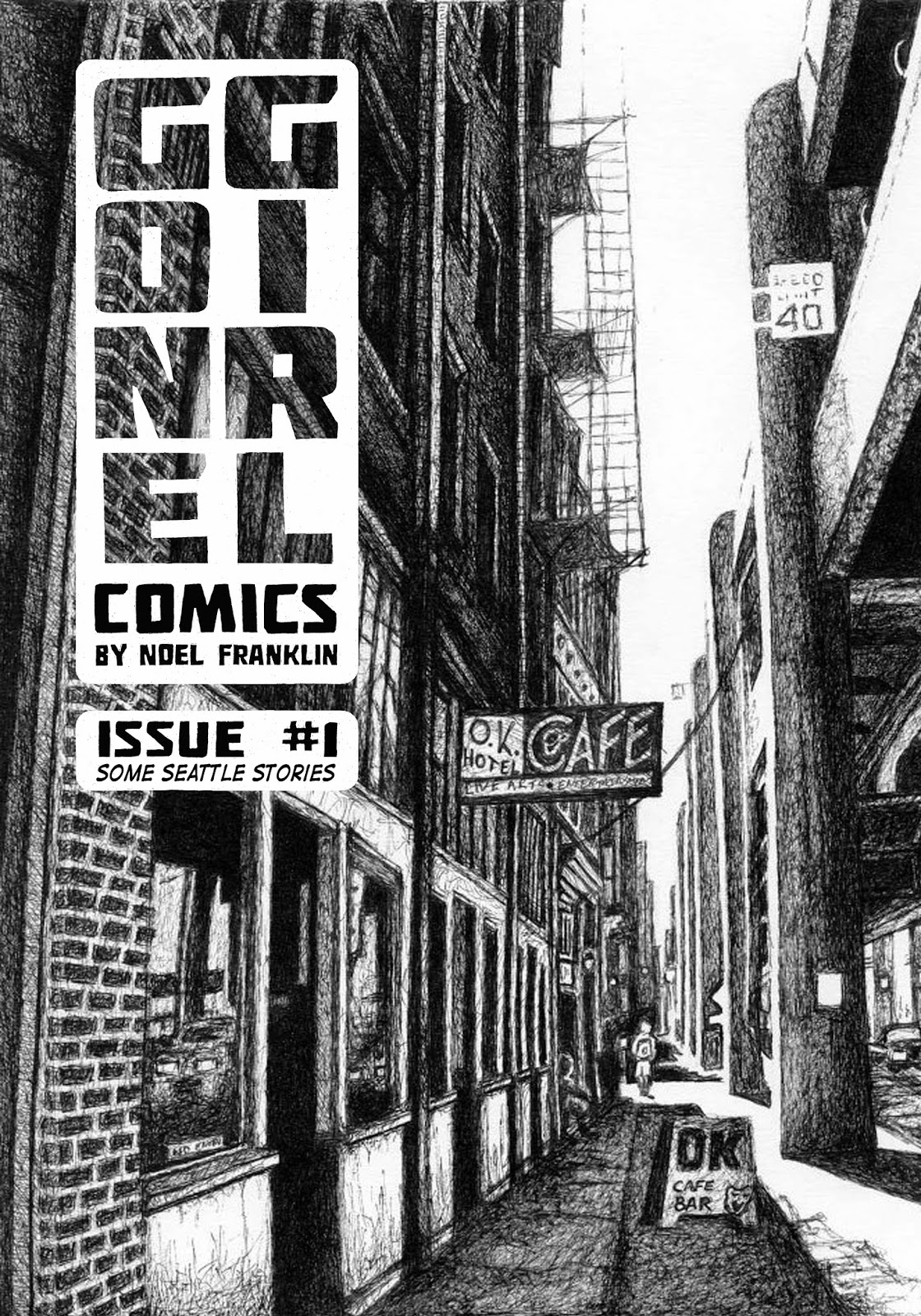 By way of introduction, Gone Girl Comics is a self-published mini-comic that I plan to produce annually.  It contains comics short stories loosely based around a theme.  The first one, "Some Seattle Stories," was selected because of a drawing I created of the OK Hotel - a performance venue that featured prominently in my life in the mid-90s.  The initial drawing inspired me to complete a graphic history of the venue and also explore the incredible energy from that time in comics form.

I had only drawn less than 10 pages of comics prior to beginning Gone Girl Comics #1, so I stayed away from stories of substance - mostly.  I was afraid I wouldn't do them justice, as my skills aren't fully developed yet.  However, at the last minute, I created something of a tribute story for Joaquin Tavares, a Seattle musician who was murdered in 2006.  It's called "Seeing Stars," and you can view it here.


I've been busy since Gone Girl Comics' debut.  2014 will see my first print publications in newspapers, journals and anthologies.  The pending publications (which you can check out here on my website) are part of why I'm kicking off C-log.

I do plan on writing about much more than my own art and want to foster a creative dialogue, SO, feel free to post thoughts, questions and ideas in the comments section below.

ALSO, hang in there with me as I learn the technology.  If there are glitches on the blog or on www.noelfranklin.com I will try to catch them and fix them as fast as I can.

See you next Tuesday!

Posted by Noel Franklin at 2:53 PM No comments: