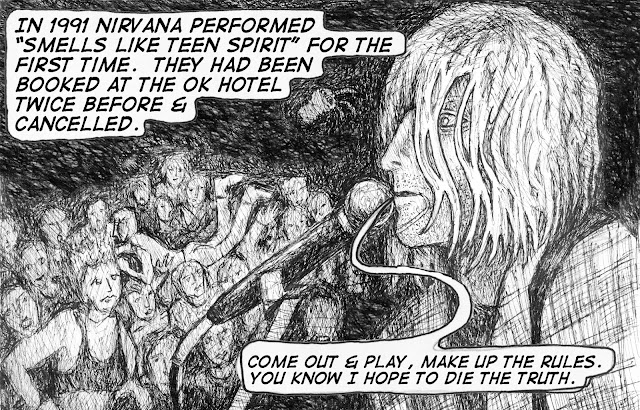 If you weren't in Seattle in the late 80s through the early oughts, or if you just weren't into live music, performance and poetry, than you probably missed out on the OK Hotel.


It had, in fact, been a hotel.  Mostly small rooms for transient laborers. Graffiti from the Wobblies still graced the back rooms.  But Steve Freeborn and Tia Mathies took over the building and made it a live music mecca, fine arts gallery and also a cafe.  The rooms above the first floor were rented out as studios.  It's like that day - dreaming you did in art school where you came up with everything wonderful that you would put in one place, only they did it!  From their first show in 1987 to closure due to earthquake in 2001, it was the most interesting place to see live music in Seattle.

There is so much to say about it, but you can read the comic.

I was a shy member of the audience for music shows there early on, but an active member of the performance poetry community later.  I regularly attended the Seattle Poetry Slam, which was introduced to the city by David Meinert and Paul Grajnert at the OK.

I left town from 2000 - 2005, so I missed the closing year of the OK Hotel.  Years later, my partner took me to see the Great Wheel on Seattle's waterfront and we got so close to the old OK that I had to go see it.  It's been converted to artists lofts with a small gallery, but no live music.  No cafe.  Kept the name but lost the life of it.

Couldn't help but take a photograph.  The wide-angle lens bent the edges of the scene, where I stood in-between the buildings and the (soon to be gone forever) Alaska Way Viaduct.  Then I drew it, posted it, and the response to that image was enough to inspire me to create a history of the venue.

I consider this comic my official entree into comics (It first published in 2013) and combines my love of live music, my work in poetry and my degree in fine arts.  I got to marry those interest in one 8-page comic, and I get to bring it to life again this weekend.

Steve and Tia may have lost the OK Hotel, but they opened a new venue in Columbia City - the Royal Room.  As 2016 marks the 15th - year anniversary of the closing of the OK Hotel and they are doing a reunion weekend, bringing back iconic bands from the 90's et al to perform at Royal Room from Thursday through Sunday night.

With help, I've been able to create a special edition of the OK Hotel comic.  It's been published previously here, on http://inktart.org/, and in a mini-comic, but I created a new cover for the story as a stand-alone special edition.

It's available onsite or via my paypal at m.noel.franklin.com

Push/Pull, What I Am Missing 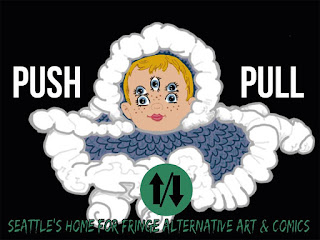 I am a super huge fan of Push/Pull Gallery - who met their Kickstarter goal and moved to a larger space in Ballard.  They've played host to Exterminator City, a micro comic convention featuring over 20 local artist with their newest zines, books, posters, releases.

I've sold a ton of comics at Exterminator City, and I'm sad that this year's event is opposite of me tabling the OK Hotel Reunion show this weekend.  But that doesn't mean YOU can't go.  And you should.

I'm happy to report that my graphic novel has been selected as one of the 30 projects funded by the Office of Arts & Culture, Seattle for 2016.

This is the second grant the project has garnered, after the 4Culture Art Project award.  I was very nearly certain the proposal would not be funded, because the application requires you to select either literary or visual arts, yet comics incorporate both.  In the spirit of "Don't Ask, Don't Get," I went forward with the application.  You can learn more about the Office of Arts & Culture, Seattle here.

Both grants support the creation of the full script plus sample chapters and require a public presentation, so I've got A LOT of work to do.  It will be worth it, though, because I should have what I need to shop the book to an agent or publishing house when I am through.

I had a fair amount of anthology inclusion in 2014 & 2015.  The highlight for me, hands down, was being included in The Strumpet, Issue #4, "The Friendship Issue."

The Strumpet is an anthology of quality comics by women only, and it publishes in both London and New York!  Issue #4 "is all about lady friends -- from best friends forever to friend with a question mark. [It] explores the highs, the lows, the joys, the sorrows, the awesomeness and the awkwardness of female friendship."

Many of the stories in this issue rocked my world, including one by Casandra Grullon that made me cry.  You can read more about The Strumpet here, and you can buy the current and back issues at Editor Ellen Lidner's Etsy shop here.

I also have a comic in the most recent issue of multi-medium literary magazine Raven Chronicles as well as Connections, a comics anthology to benefit the American Foundation for Suicide Prevention.

Moving forward, I have a 3-party collaboration with Seattle Cartoonist Mark Campos and Seattle Musician Amy Denio, to be featured in the pending 11th Dimension Press' "Rock is Not Dead" anthology with accompanying music CD.  Mark conceptualized the story based on the Throwing Muses song "Not Too Soon" and Amy Denio recorded a cover of the song and had Mark and I play "trash percussion" utilizing only a wash basin and mallets.

Starting the sample chapters of my graphic novel leaves little room to work on other independent project, unfortunately, but I AM collaborating with writer Anne Bean on her story "Coyote and Butterfly Woman."

The story is a modernized version of a tradition Nez Pierce story, and I get to have fun drawing anthropomorphic characters.  Anne has also joined into the grants game, and this comic collaboration is made possible in part by an Artist Trust GAP grant she secured.

Next Week:  Tabling In Honor of a beloved Seattle institution, The OK Hotel.

C-log posts on comics, publication and community that publishes on Tuesdays.
Posted by Noel Franklin at 7:25 AM No comments: