An Award, A Party & The Best Damn Comics Festival I've Ever Seen 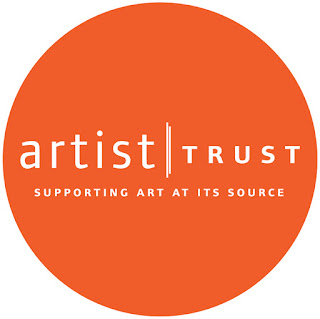 I am excited to report that my application to the Artist Trust Grants for Artist program has been met with success!  I am honored to be one of the 61 artists to receive funding in the 2016 grant cycle, including fellow cartoonist Sarah Rosenblatt plus cut paper artist and animator, Lauren Lida.

I wrote about the process of creating this application back in May, including how I felt my work had been rushed but also sensed that the universe had sent me a positive sign after I finished my submission.  I'm so happy that I was not wrong.  Big thanks to Artist Trust for supporting me.  The funding they provide will be just enough to push the sample chapter of my graphic memoir into being. 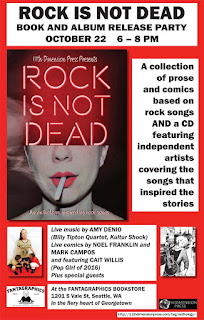 It's here at last!  The Seattle project release party for Rock Is Not Dead will be happening this weekend on Saturday, October 22nd from 6 PM to 8 PM at the Fantagraphics Bookstore and Gallery.

If you can make it, please come by.  Mark Campos created an excellent animation out of the comic we created for the printed anthology.  Come view comics in action plus a musical performance by Seattle Jazz Hall-of-Famer and punk rocker (yes, she does it all!) Amy Denio, who recorded a track for the project CD.

More on the anthology itself can be found on the 11th Dimension Press Website here. More on the event is on the Facebook event page.  And if you just want to purchase a copy, it's available at my Etsy store here.

Cartoon Crossroads Columbus celebrated it's second year this year as one of the world's coolest comics festivals.  They are not a big-ticket super hero comic-con.  Instead they are celebrating comics as art, and putting the innovators of comics as art in the center of their programming.  They are not a standard tabling event.  The festival has a tabling component, yes, but its schedule is built around fairly intimate panels, workshops and lectures by the industries' leading creative professionals.

This may sound dry to you, but it's a blast, and a big part of that is because you get to meet and talk to people you would never normally get to hang out with at the Cartoon Crossroads Columbus receptions and parties.

Last year I spent almost half an hour talking with Jaime Hernandez, who was my main reason for attending, but then also got to talk with Art Spiegelman in the hallway of the Wexner Center for the Arts and Bill Griffith during his book signing.

This year I informally talked about micron pens with Sergio Aragones and Stan Sakai at the opening reception, discuss racism and home schooling with Keith Knight and traded art and stories regarding our shared affinity for trilliums with Seth.  I picked up tips on script development from Raina Telgemeier and friended Carol Tyler and laughed until I cried at the antics of Lalo Alcaraz during a panel about political cartoons.

This is just brushing the surface of awesome experiences I've had at Cartoon Crossroads Columbus.  Mark Campos, who traveled with me this year, posted a small photo album here and wrote a blow-by-blow of our experience this year on his personal blog here.    But check out their website for yourself, and plan on attending next October!